In addition to being a Momma-in-Training, I am also work for the most magical company on earth: Disney. My current position is with Internships and Programs recruiting but I am a current seasonal Cast Member at the wonderful Walt Disney World resort in Orlando, Florida where I work as Parade Audience Control and Park Greeter at The Magic Kingdom. 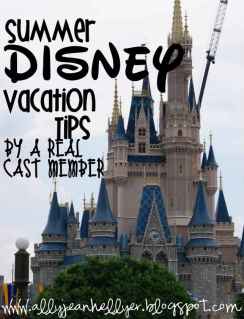 Searching around the web, I’ve seen a lot of posts from accredited tourism sites (and plenty from Mom-blogs) giving tips about traveling to the parks and I’m here to offer probably one of the most important set of tips, surprises, and common misconceptions from the point of view of people who actually WORK in the parks and are there to make sure your vacation is the best it can be.

**** WOW! Hello to everyone from Pinterest! If you’re interested in keeping up to date on all things Ally Jean, feel free to like my Facebook page! You can also see more Disney Vacation tips here! Thanks!

Let’s start with some Magic Kingdom Entertainment Tips. Magic Kingdom is the place for nighttime entertainment, especially because of the fireworks, Wishes!, and the fantastic Main Street Electrical Parade (called the ELP by Cast Members). Most nights in the summer, the park’s entertainment schedule will go something like this:

On a double ELP night, ALWAYS stick around for the second one. I know exactly what you’re thinking: 11PM is way too late for your little one to not be in bed. But here is one tip coming from working those front lines at Magic Kingdom: it can be done. The crowds for the first parade are INSANE and in order to expect to make that parade with pretty good seats, you should plan on picking out a spot around 7:15/7:30 and staying there throughout the night.


At 10:00, the street around the castle (also called The Hub) and Main Street will be PACKED with people with small walkways along the far outer edges of the sidewalk to the right and left. At 10:20 when the fireworks end, you will be with a massive amount of people turning and walking for the exit with you. That means that everyone who is stuck in the street with you and your family will now be waiting in line for the bus back to your resort, the monorail to the parking lot, even the boat. And that line will be over an hour.

Enter the second parade, take an extra two hours to explore the park, ride some rides! You can even catch the fireworks from Fantasyland (by Pinocchio’s Village House is one of my favorite spots!) and then walk to the castle area to catch the 10:30 presentation of MMY.

As always, when enjoying the parade stay away from Casey’s Corner and the Ice Cream Plaza at the far end of Main Street USA. While it may seem like prime viewing area there is very little area in which you can sit and Cast Members are relentless about keeping people in those limited viewing areas.

While it may seem like Cast Members are just yelling for the sake of yelling, LISTEN TO THEM. That area and its limited walking areas are the only ways for people in the front of the park to get to the back, and people at the back of the park to get to the front. Additionally, it contains one of the only access points to First Aid. Just listen to the Cast Members, they know what they are talking about!

NEVER EVER EVER sit in front of trashcans along the parade route. One of the biggest comments I got from Guests when I worked at Magic Kingdom was “I was here a year ago and sat here and it was just fine”. Sitting in front of the trashcan during a parade is absolutely never allowed. If you got to sit in front of one during some other time in the past, look around for the employee who told you it was okay because they probably don’t work there any longer. Trashcans are stationary objects and sitting in front of them makes it harder to evacuate the parade route in the case of an emergency.

Think it doesn’t happen? Last year during a Halloween parade, a float lost power and brakes and flew into the float in front of it, pushing it out of the way before careening down the hill at Splash Mountain, stopping only when it hit a stationary post. If you have trouble standing, tell a cast member–they can bring you a wheelchair.

The Magic, The Memories, and You (also called MMY) is an amazing show at the castle. (I even talked about it a bit in this post.) They have even retrofitted it for Summer, transforming the Cinderella castle into a sandcastle and even a scene out of Lion King!

Have a free day and looking for a way to keep cool while getting the Disney experience (for free?) Resort Hop! If you park at the Ticket and Transportation center you can easily walk to the amazing pools at the Contemporary, Polynesian and Grand Floridian resorts. Enjoy the Disney experience of their amazing hotels and just pay for parking!

Resorts have cute little stores, and amazing places to eat. Our favorite is Kona Cafe in the Polynesian. Have the sticky wings–they’re to die for!

NOW LET ME BE CLEAR: If you have your own vehicle, it’s very difficult to simply drive up to a resort gate and get let in without being a resort guest at a different hotel or part of the Disney Vacation Club, or having a reservation for dining somewhere in the resort. The key to proper Resort Hopping is to park at public parking (The Ticket and Transportation Center, Downtown Disney, or self-parking spaces) and make your way to the resort. The best way is to park at Magic Kingdom and take the walkway or Resort Monorail to Polynesian and Grand Floridian–The Polynesian beach is even a great place to watch the fireworks at the end of the night!

If you’re in the parks and looking for a place to cool down (or a place for nap time for the little ones), there are several really great attractions that are quiet and pump out the AC like crazy. These rides also tend to be on the side of cheesy animatronics and education so they tend to have significantly low wait times (if any at all)

There are also a few no-line, do at your own pace attractions for families with kids including the Perry the Platypus World Showcase game at EPCOT (formally Kim Possible and really really fun!) and Sorcerers of the Magic Kingdom. I also recommend purchasing a Hidden Mickey book, which comes with a scavenger hunt for each theme part,  making waiting in line go faster and it’s fun to see how many Mickey’s you can find!

When planning your trip, avoid the parks on the 3rd, 4th, and 5th of July. Those are the second most busy days year round after New Years and usually mean they will start restricting who can enter the park, people staying off property (not at a Disney resort) with standard tickets (not Vacation Club or Passholders) will be cut off first.

As always, make sure you’re purchasing your tickets through a licensed distributor. Ticket prices are subject to change at any time, and will more than likely rise during peak seasons (when everyone else is vacationing as well). The Disney Store sells the exact Magic Your Way Tickets that are available at the gate, and, if purchased early, can help you from paying too much at the gate if ticket prices rise. The lines at the Disney Store are always shorter than at the gate and the longer you plan to stay in the park, the cheaper your ticket is per day.

Eat before you go, pack some snacks, and prepare for extreme heat (sunscreen, hats, water bottles are all a must!)

But, the most important tip I can give you is to MAKE FRIENDS WITH CAST MEMBERS. If you have a question, ask them and take time to listen to what we have to say. Cast are not drive thrus: don’t shout questions at them as you walk past. Ask them where you can and cannot sit for the parade, and tell others around you if they don’t listen (the Cast will reward you).

These Cast in the bowties are some of the best people you will ever meet.

Take a second and read a Cast’s name tag, they are not all from Orlando and many are college students. Remember that no amount of money you paid to get in the park gives you any right to assume you can treat people however you want or do whatever you want. Say a thank you every now and then with a smile, Cast love to hear it.

If you have a Cast Member go out of their way to make your day TELL SOMEONE. Go to Guest Relations with the name of the Cast member, where you met them, maybe where they were from and rave about them. More often than not, cast hear only about complaints, make the effort to give them compliments if they deserve them.

Hope this helps you on your future summer Disney trip!

Have a magical day!